Revelations that a police officer spied on the family of Stephen Lawrence will lead to a judge-led public inquiry into undercover policing.

A review found that a Metropolitan Police officer worked within the “Lawrence camp” while a previous inquiry into the death was under way.

Home Secretary Theresa May described the findings as “deeply troubling”.

Stephen Lawrence was stabbed to death in an unprovoked attack by a gang of white youths in April 1993.

The high-profile case – which remained unsolved for nearly two decades – is seen as having had a major impact on race relations in Britain, with an earlier public inquiry accusing the Metropolitan Police of “institutional racism” and subsequent major reform of the justice system in England and Wales.

The undercover officer in question, who has not been named in the report by Mark Ellison QC, was deployed by Scotland Yard’s Special Demonstration Squad (SDS).

The squad, which operated until 2006, deployed officers into activist groups that then sought to attach themselves to the Lawrence family campaign for justice over the killing.

Addressing MPs following the review’s publication, Mrs May proposed a new offence of police corruption that would replace one of misconduct in public office.

Speaking in the House of Commons, Mrs May said: “Policing stands damaged today. Trust and confidence in the Metropolitan Police and policing more generally is vital.

“A public inquiry and the other work I have set out are part of the process of repairing the damage.

“Stephen Lawrence was murdered over 20 years ago and it is still deplorable that his family have had to wait so many years for the truth to emerge.”

Prime Minister David Cameron tweeted: “Like the Home Secretary, I find the conclusions of the Stephen Lawrence review profoundly shocking. It’s important we have a full inquiry.”

Following the Ellison report’s publication on Thursday, Stephen’s mother Baroness Lawrence said: “I’m not shocked. It’s something I suspected all along.”

She watched from the House of Commons public gallery as Mrs May also told MPs of plans to introduce a new criminal offence of police corruption.

“Mark Ellison’s report has simply corroborated what I have known for the past 21 years and our long fight for truth and justice continues.”

In response to the review and the home secretary’s comments, Metropolitan Police Deputy Commissioner Craig Mackey said there could be no serving police officer who would not be “saddened, shocked, and very troubled”.

He said he understood that Doreen and Neville Lawrence must feel “all the trust we have worked to build is shattered”.

Mr Mackey added: “Corruption has no place in the Met Police – and people need to know that they cannot hide behind the veil of the past.”

Former Scotland Yard undercover officer Peter Francis said last year that he was instructed in 1993 to find information that could discredit the Lawrence family. 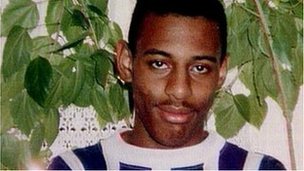 Black teenager Stephen Lawrence, 18, was stabbed to death in an unprovoked attack by a gang of white youths as he waited at a bus stop in Eltham, south-east London, in April 1993.

A number of suspects were identified soon after the attack but it took more than 18 years to bring his killers to justice.

Several attempts to prosecute the suspects, including a private prosecution by the family, failed owing to unreliable or insufficient evidence.

In 1997, then Home Secretary Jack Straw ordered a public inquiry into the killing and its aftermath after concerns about the way the police had handled the case.

Sir William Macpherson, a retired High Court judge, led the inquiry. He accused the police of institutional racism and found a number of failings in how they had investigated the murder.

In January 2012, Gary Dobson and David Norris were found guilty of the murder by an Old Bailey jury after a review of the forensic evidence.

He told the Guardian and Channel 4’s Dispatches programme he was told to pose as an anti-racism campaigner in a hunt for “disinformation”.

Mr Ellison said: “The mere presence of an undercover Metropolitan Police officer in the wider Lawrence family camp in such circumstances is highly questionable in terms of the appearance it creates of the MPS having a spy in the family’s camp.”

In 2012 Gary Dobson and David Norris were found guilty of murdering 18-year-old Stephen Lawrence and sentenced to minimum terms of 15 years and two months and 14 years and three months respectively.

Meanwhile, a separate report has been published on Operation Herne – an investigation launched by the Met into allegations made by Mr Francis on undercover policing.

It found no evidence to back claims from the former Scotland Yard undercover officer that he was tasked to smear the Lawrence family or their campaign.

However, the report did find failings regarding allegations about undercover officers indulging in inappropriate sexual relationships.

It said the Crown Prosecution Service had been asked to advise whether criminal charges should be brought over the allegations of such trysts.

The report said: “There are and never have been any circumstances where it would be appropriate for such covertly deployed officers to engage in intimate sexual relationships with those they are employed to infiltrate and target.

“Such an activity can only be seen as an abject failure of the deployment, a gross abuse of their role and their position as a police officer and an individual and organisational failing.”

Publishing the progress report, Deputy Commissioner Mackey said the Met believed Operation Herne was being conducted with “rigour and integrity”.

“The officers face an enormous challenge – investigating 40 years of the history of a secret and insular unit that rarely documented its activity,” he said.

“This is the ultimate ‘cold case’ and that’s why this investigation – some of which concerns criminal allegations – has been lengthy. We are determined to pursue it wherever the evidence may lead.”

Bullying and Racist Bullying in Schools: What ARE we missing? Be More Than a Bystander

Bullying and Racist Bullying in Schools: What are we Missing?